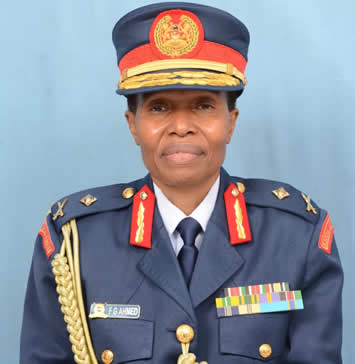 Major General Fatuma Ahmed joined the Kenya Defence Forces in 1983 and was commissioned in 1985 upon completion of foundational Military Officers Training at the Kenya Military Academy (KMA), and posted to the then Women’s Service Corps.

While at the Corps, her experience was enriched through various Command and Staff appointments up to 1999, when it (the Corps) was disbanded and she joined the Kenya Air Force. She is an alumnus of the National Defence College, Kenya.

Currently, she is pursuing Master of Arts Degree in Social Transformation, specializing in Organizational Management at Tangaza University College, Nairobi. This is after graduating with Bachelor of Arts Degree in Sustainable Human Development from the same Institution.

She served the Kenya Air Force as a staff officer from December 1999 to July 2015 up to the rank of Colonel.

She has been awarded various decorations and medals which include; Elder of the Burning Spear (EBS), Order of the Grand Warrior (OGW), Operation Linda Nchi Campaign Medal, among others.

She was promoted to the current rank of Major General and appointed Assistant Chief of Defence Forces Personnel and Logistics (ACDF P & L) in July 2018. In the year 2021, she was appointed the Commandant Kenya Military Academy.

About the Kenya Millitary Academy

Academy is a college of the National Defence University-Kenya (NDU-K). It is a Premier institution for basic foundational military Officer training and intellectual development. The Academy is responsible for training Cadets for commissioning as Officers. In the NDU-K programme, the course content will lead to a Cadet attainment of Bachelors of Science in Defence & Security Studies upon successful graduation.

Academy is a Centre of Excellence, charged with the mandate of providing value based foundational military leadership or officer training, education and inspiration to selected Kenyan and allied Cadets, to attain excellence in the profession of arms.

To be a centre of excellence for foundational military officer training and education.

To provide foundational officer training, intellectual and character development to cadets in order to prepare them for Leadership, Command, and Inspiration to attain professional military.

Organization of the Academy

In order to achieve its Mission, the Academy is organized into Academy Headquarters, Officer Cadet School, Faculty of Academic Studies, Department of Research, Standards, Character Development, Centre of Excellence in Coaching and Mentorship and Academy Admin wing.

In order to achieve its Mission, the Academy is organized into Academy Headquarters, Officer Cadet School, Faculty of Academic Studies, Department of Research, Standards, Character Development, Centre of Excellence in Coaching and Mentorship and Academy Admin wing.